The tradition of hunting with Tazi dogs have come to us from the depths of history. It is the only hunting breed of nomadic tribes of Central Asia. Scientists suggest that the ancestors of present-day sighthounds of Central Asia were the hunting dogs, brought by Arabs during their wars of conquest in VIII A.D. Long and painstaking work of nomads on the breed, thorough selection, careful blending of blood, and hard training had given the world new aboriginal breed, given later an Iranian name of Tazi (The one that attacks). Unlike their Arab ancestors, Tazi are very tolerant of harsh climate of Asian steppes and deserts.

Tazi is a national pride of the people who bred it for thousands of years. Tazi were honoured, cherished and protected, and the owner knew his dog’s bloodline up to the sixteenth’s generation. Tazi were the only dogs provided a place in abode, the best piece of meat from the table, and special embroidered and beaded pillows.

It is worth noting that hunting with sighthounds in Turkestan never was exclusively a privilege of upper-class people, and vast hunting areas were enough not only for khans and for bais (a rich man in Central Asia) but also for ordinary men. Nomadic herdsmen and chabans (shepherds) enjoyed perfect conditions for raising and training as well as for selective breeding of sighthounds. Hunting with a dog was their favourite sport, which brought material benefit along with that. 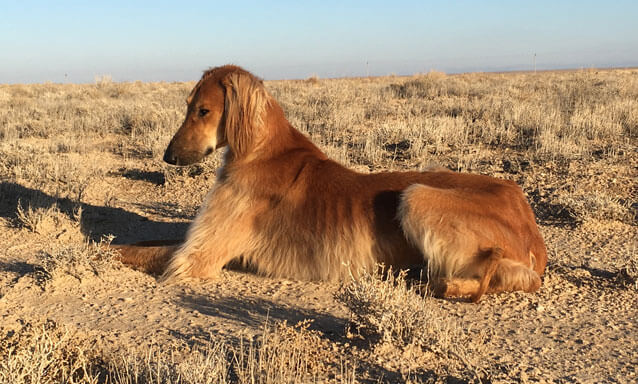 For many centuries, Tazi has been the only hunting dog in our region, which is why it embodies such qualities of a universal hunter as agility, sharp eyesight, prowess, and ability at prey catching. Tazi easily catches susliks and marmots, chases down the corsac foxes and hares, while the best Tazi will go after a saiga, a jeyran and even a cheetah. Not without a reason the legend says it that the fastest Tazi are born from an egg of a ruddy shelduck, which has given the dog the speed of its flight. However, agility and speed are not the only advantages of Tazi dogs. Their distinctive characteristics are long run and prey retrieval abilities. Thus, Tazi is capable of not only gripping the prey after a high-speed chase on distances more than 15 kilometres but also retrieving it to the hunter. 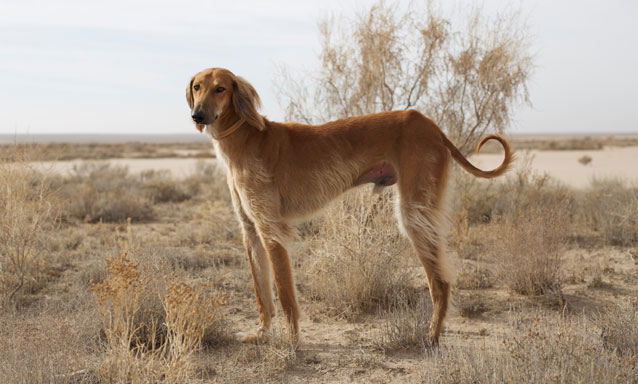 If Tazi catches larger prey, owing to its obedience and calmness with regard to the prey, it will simply wait for the hunter without tearing off flesh and eating it, which is inherent in European breeds. A sharp eye and a sensitive nose, ability at following a scent trail and at driving out a hiding animal from thickets allow Tazi dogs to work both in the forest and on the rugged terrain.

Besides, Tazi works fine together with a bird of prey. In this case, the dog drives out the animal to the open area where the falcon, flown at the right time, grabs the prey. It is the most spectacular and successful way of hunting.

Over the past centuries, in Uzbekistan has evolved its own type of the dog. Uzbeks and Karakalpaks, who inhabited the Oasis of Khiva, were barely hunting, which had left its mark on the exterior of Khiva Tazi. Selection of breeders was also less thorough because it was not easy for a settled person of the Oasis of Khiva to travel long distances to mate his dog.

To date, people in Uzbekistan start to forget that Tazi dogs actually exist here. According to some data, only a small number of half-breed Tazi remained in Bukhara, Dzhizak and Tashkent regions. After all, the remarkable hunting qualities of Tazi as well as the exciting and successful ways of hunting with them clearly show the value of this breed. Besides, the history of breeds and the hunting dog-breeding are a part of civilization of ancient peoples. Honour and respect for the memory of our ancestors and revitalization of national traditions of hunting is the primary task of today hunting organizations and environmental protection bodies. It is necessary now to take crucial decisions to rehabilitate and preserve pure Tazi breed – the most valuable aboriginal breed of sighthounds.

Such a decision should be a creation of specialized facility based on Tugan Falconry Club that will review the number of remaining Tazi; evaluate the purity of the breed; create maternal population; and start the breeding programme, focused not only on preserving the conformation of the breed but also the working qualities of unique sighhounds. It is also necessary to popularize and to conduct educational activities such as hunting shows with Tazi dogs. 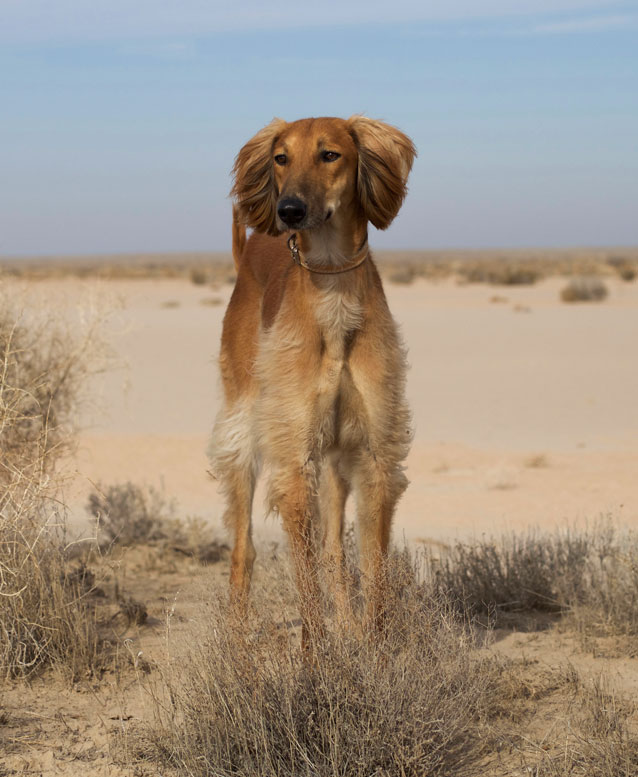 Based on works of: 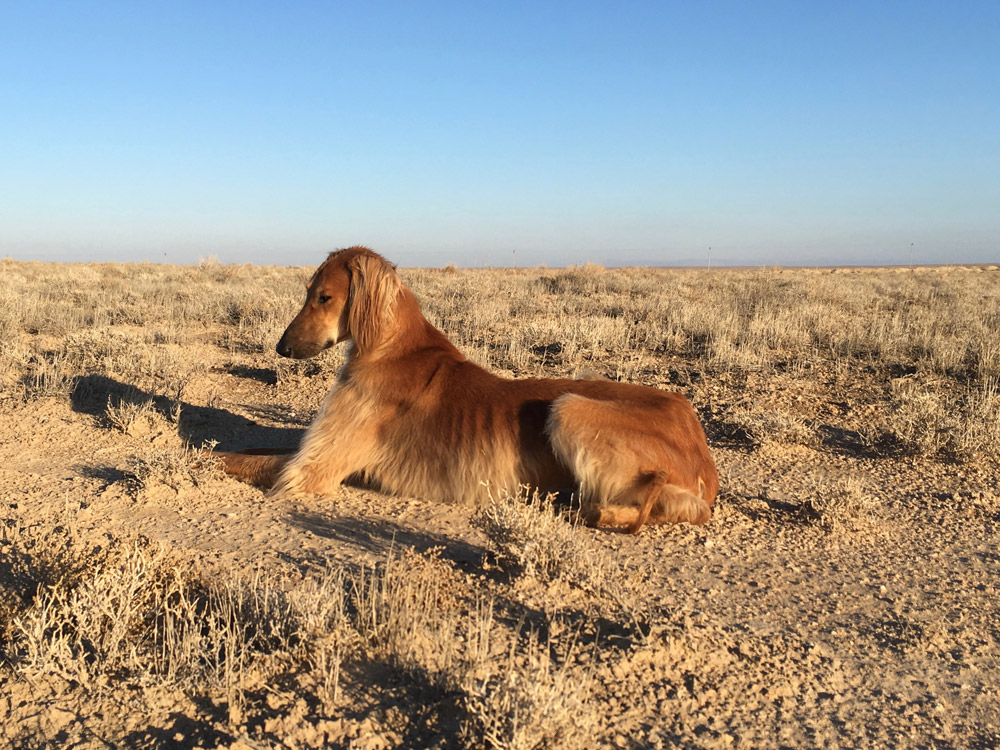 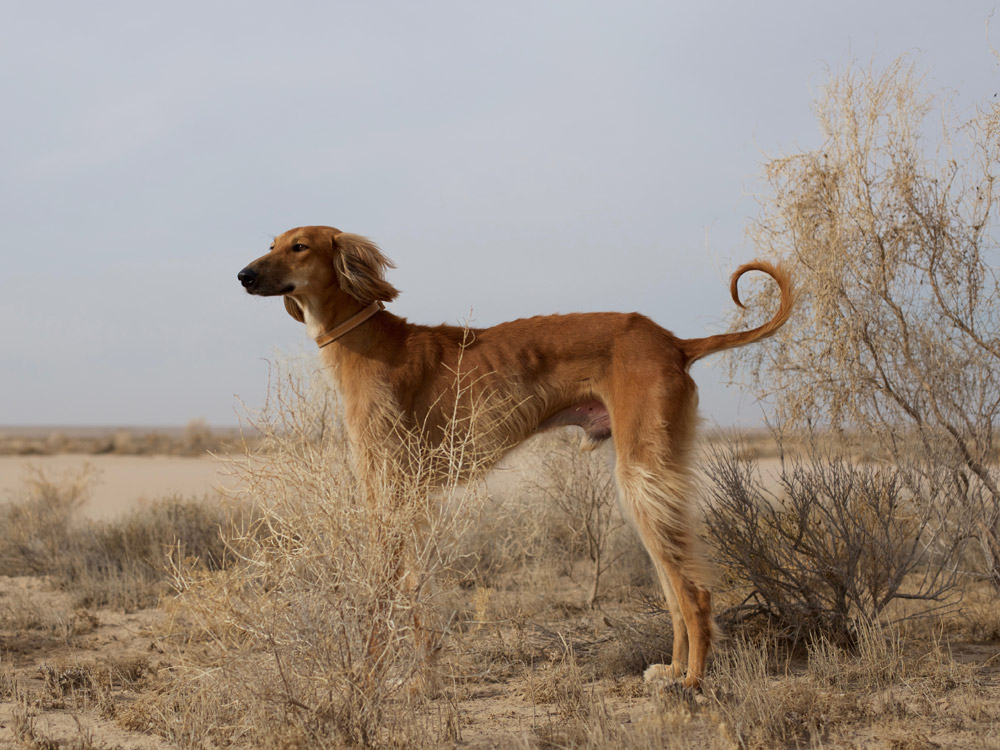 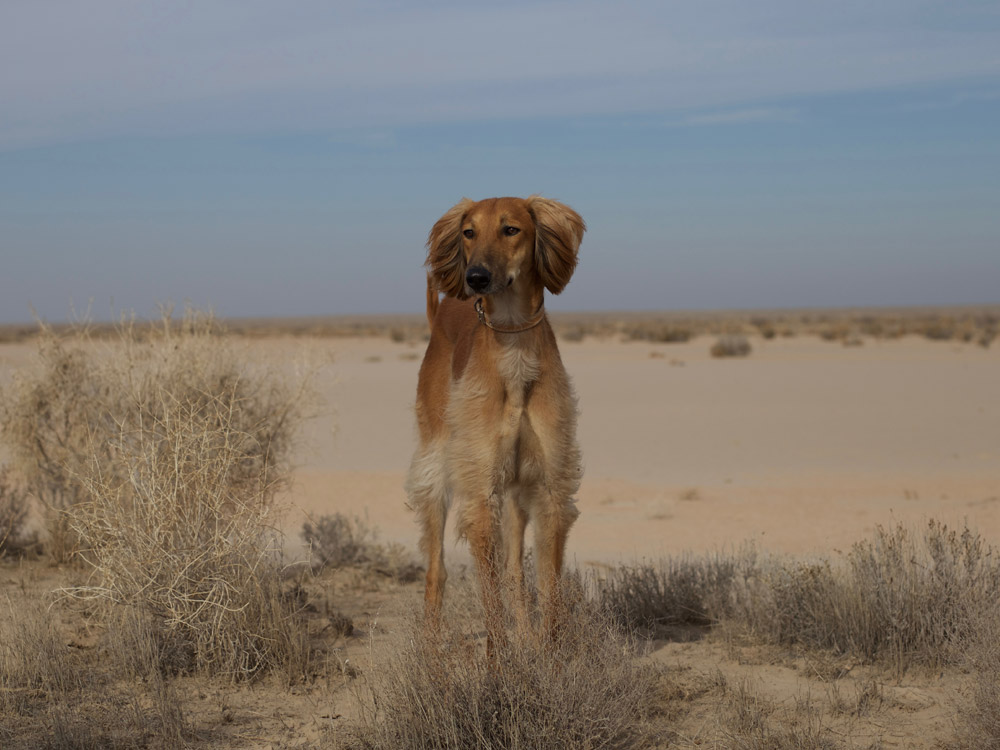 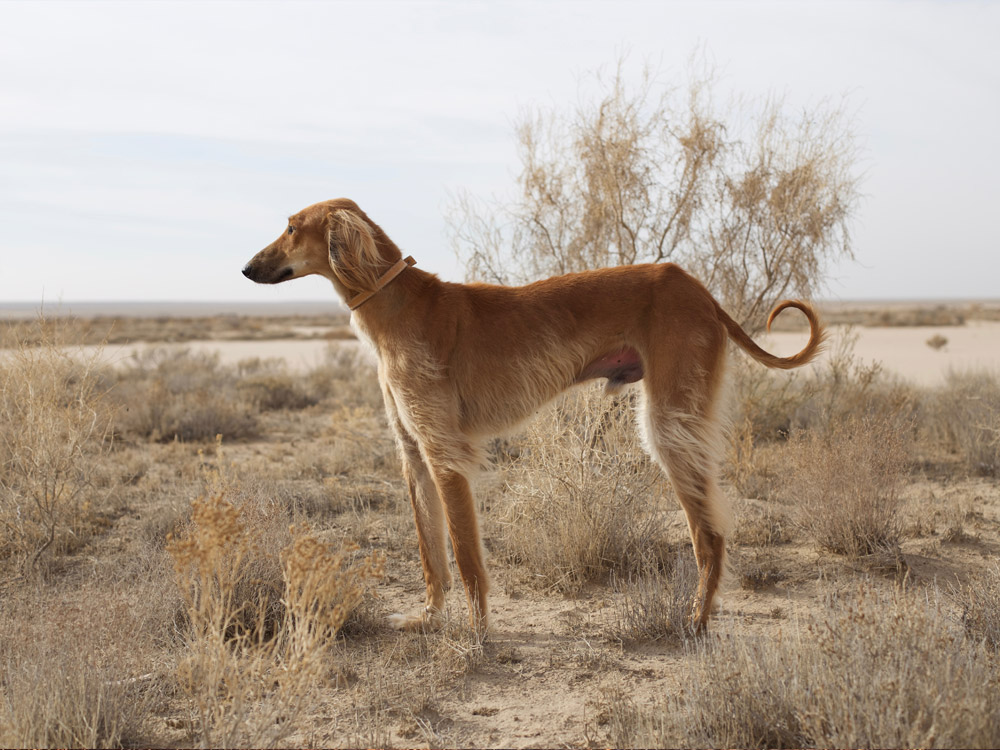 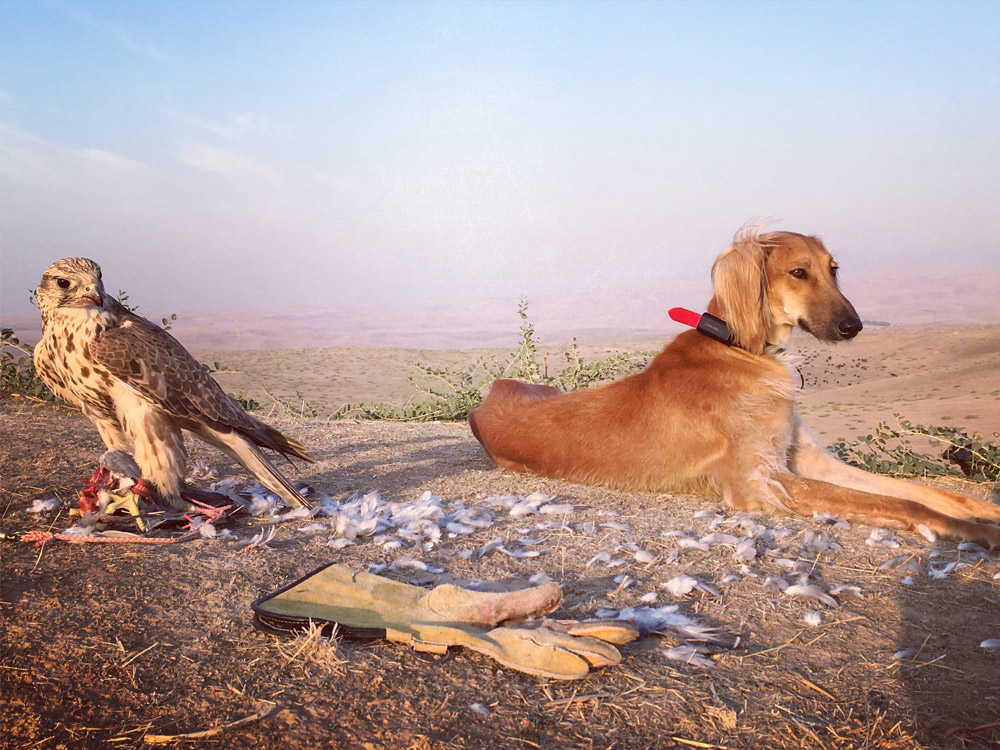 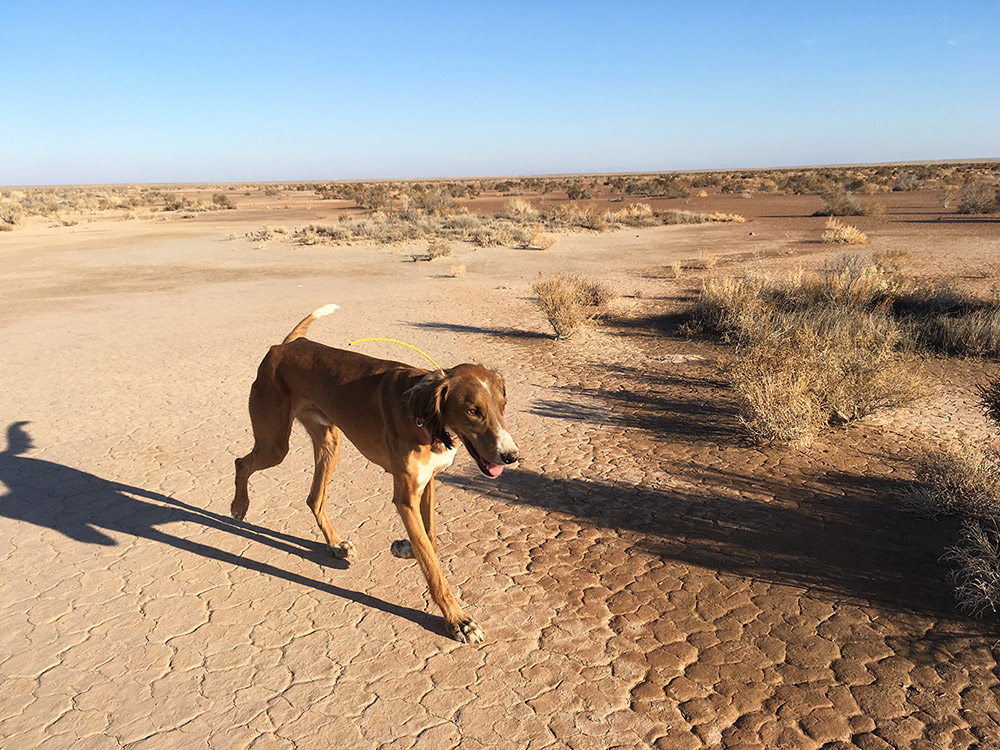