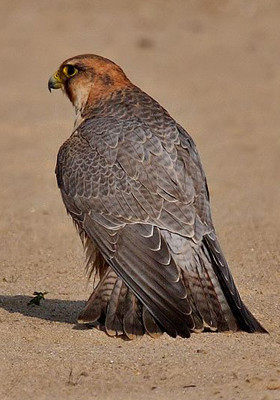 ATTENTION! THIS ANIMAL IS LISTED AS ENDANGERED IN THE REPUBLIC OF UZBEKISTAN! 2(VU:R): Vulnerable, rare species. Listed on the IUCN list as (VU), introduced to CITES appendix I.

In the Republic of Uzbekistan special attention is paid to the protection of birds of prey, listed in the Red Book. It is a criminal act to illegally produce, possess, purchase, transport or smuggle a Barbary.

The Barbary has a similar appearance to a Falcon, but is a little smaller. The top of its body is lighter in colour with reddish edges of feathers, a narrow, brownish ‘moustache’, bordered with reddish spots on the sides of the neck and prominent reddish markings on the head – hence the name is ‘Barbary falcon’. Mature Barbary Falcons have pale smoky-grey backs with more or less noticeable reddish rims on the mantle feathers. Their underbelly is reddish with fairly weak coloured streaks. Young Barbary Falcons top have more or less reddish backs and heads with a broad rims of red feathers, whilst their underbelly is an ochre and reddish brown colour with broad, irregular markings and brown cross pattern sides. The body length is 33-39 cm. Females are larger than males. A Barbary Falcon’s typical wing length is 274-302 mm in males and 315-332 mm in females. Males weight in at 330 grams, whereas the females weigh approximately 500 grams, with a maximum recorded weight of 750 grams. The bird’s wingspan is from 76 to 98 cm.

In Uzbekistan Barbary Falcons are rare, with the few that do reside in the territory located sporadically, preferring desert lowlands and foothill areas.

Barbary Falcons are distributed in the deserts and dry foothills (up to 1,500 m) in North Africa, the Middle East, the Arabian Peninsula, Iran, Afghanistan, Pakistan, India (Kashmir region), Central Asia, in the mountains and foothills of the south and south-east of Kazakhstan from Talasskogo Alatau to Tarbagatai or even the Southern Altai.

Like other large falcons, the Barbary Falcon builds itself a nest, occupying buildings or like other birds of prey, using a convenient natural niche. The most inaccessible areas of rocks and cliffs are always favoured by this bird.

The Barbary Falcon’s diet is dominated by birds; larks, stove, sand grouse, desert partridges and other species. In Uzbekistan, this bird attacks ducks and pigeons in the Autumn and winter, whilst in the breeding season hunting for pink starlings. The Barbary Falcon’s ecology, breeding biology, behaviour and characteristics are the same as that of the peregrine falcon.