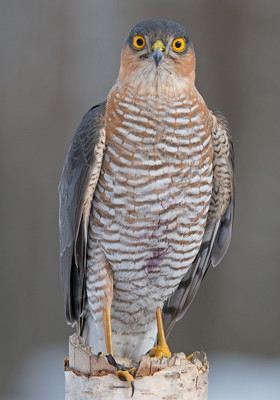 The Eurasian Sparrowhawk is a small bird of prey with short broad wings and a long tail that helps it to manoeuvre through the trees. Females may be longer than males by 25%. This bird flies with an active, rapid beating of the wings, alternating with dives. Unlike small falcons the Eurasian Sparrowhawk never hangs in the air.

In Uzbekistan, the Eurasian Sparrowhawk is a sedentary bird and it is common to see them during the spring and autumn migrations. This bird of prey is widespread in temperate and subtropical regions of Eurasia. From the colder regions of Europe birds migrate south or southeast to Asia for the winter, with a smaller portion of them flying to the north of Africa.

The Eurasian Sparrowhawk lives in wooded areas, but does not usually fly through the forest, keeping to open spaces. Eurasian Sparrowhawks generally feed on birds, though occasionally has been known to hunt small rodents (mice, voles). The male generally catches small birds, whilst the female pursues larger prey. There have been cases of them hunting lapwing, doves and partridge.

In Uzbekistan, this hawk nests in the mountainous, forested zones. The Eurasian Sparrowhawk is a sedentary bird and starts to breed quite late in May. The nest is loose, fairly deep in construction and randomly lined with sprigs of pine needles, and sometimes dry grass. The diameter is 380-400 mm, with the height being about the same. The remains of eaten prey, small birds, can be found in the hawk’s nest. The female lays 4-6 matt-white eggs with dark ochre or brown spots of various sizes in the nest. Dimensions of the eggs are 37-43 x 30-33 mm. The incubation of the eggs lasts about 32 days. The chicks are born in late June-early July. In the first half of August, the chicks are already able to fly.

The Eurasian Sparrowhawk is a very agile and quick predator. Its main prey are small birds that it more often than not catches on the wing. It is well suited for this purpose.