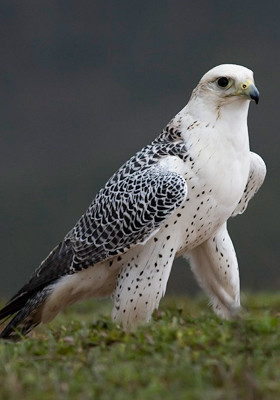 Included in the IUCN list, introduced to CITES appendix I.

The Gyrfalcon is the largest of the falcons. The male weighs a little more than 1 kg, with the female weighing in at up to 2 kg. The body type is large, with a tarsus plumage 2/3 length, long and pointed wings and a relatively long tail. The colouring of the Siberian Gyr is light, but does change: from a brownish grey to almost white on top; the abdomen is whitish with a dark pattern. The dark, whisker-shaped band near the mouth is barely noticeable. On the upper mandible, like all falcons, there is a characteristic tooth. The feet are yellow. The Gyrfalcon has a high flight speed; after a few strokes of the bird quickly rushes forward, not hovering. When sitting it keeps straight. The merlin is like a peregrine falcon, but is larger and has a longer tail. The South Mountain subspecies, named the ‘Altai’ gyr, which many experts consider a subspecies, is characterised by a uniform dark colour.

In Uzbekistan the Gyrfalcon is not often found. In some winters it may be found on the territory of Kazakhstan and Kyrgyzstan, in the Chu and Talas river valleys. Currently, with the overall decrease in numbers of many species of large birds of prey, sightings of the Merlin in Uzbekistan are rare.

The Gyrfalcon lives in the artic and sub-artic regions of Europe, Asia and North America, with separate subspecies existing in Altai, Sayan and Central Tian-Shan regions. The northernmost point that they inhabit is Greenland and the southernmost, aside from Asian subspecies, is mid-Scandinavia, Commander Islands and Bering Island. On the migrations during the winter months, going to 60° North in North America, Asia, Europe. Some individuals are found further south.

The types of food that can be fed to Gyrfalcons are medium-sized birds and small amounts of mammal. The bird requires approximately 200 grams of food a day. The bird of prey plucks and eat their prey in a certain place in the vicinity of their nest or eyrie. Here you will find remnants of food, as well as regurgitated bones, feathers and wool. Gyrfalcons attack their prey ‘in hawk-wind’; flying up and underneath the prey, folding their wings and sinking in their talons. They will catch predominantly flying birds. Once the Gyrfalcon has caught its prey, it will use its beak to break the neck and bite through the head. Gyrfalcons usually do not build nests, often taking advantage of crow or buzzard nests. Gyrfalcons tend to occupy the same slot over a number of years and even decades. They usually lay 3-4 eggs. When the chicks are small, both the male and female catch food for them and breaking off the head and limbs of their prey outside the nest, so that there are no feathers in the nest.

In the Middle Ages, the merlin was highly prized as a hunting bird. They were divided into ‘white’ Gyrfalcons - the best and most valuable (from Iceland and Norway) or ordinary ‘grey’ and red, colours which are now very much appreciated in the East. Gyrfalcons are excellent birds of prey, killing birds swiftly, using all their strength.